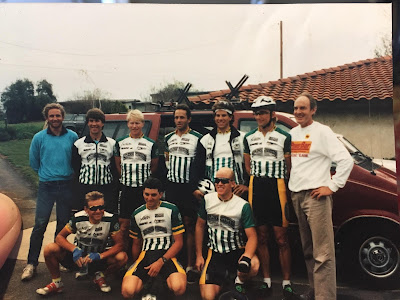 As an 18 year old, I thought I won the lottery when I was asked to ride for Wheelsmith's Pro/Am team. It wasn't like Paul Willerton going to Team Z but it still had that magical moment for me. Andy just came off a 2nd place at the US Olympic Trails RR and Robert and Kristif both had a Polish national champion jersey in there duffle bag.  Here is a shot from the 1993 Redlands Bicycle Classic.

For the record: we were sponsored by a small Ti frame manufacturer out of Mass called Merlin and we tested out the original electronic groupo via Mavic. At Tour of Willamette we had to basically dip our rear deraillers in silicone to ensure at least 3 cogs were accessible to us on the steep climbs.
Posted by Steel WÜl at 8:20 AM