For the record:
My first partner at the Aromas Tri-County Fire Protection District -Fire Captain Mike Shores and his brother Robby Shores (famous surfer)also graduated with them.
Posted by Steel WÜl at 7:30 AM 2 comments:

Reason #936 to rid the planet of television - Viggle

I was minding my own business this morning while scanning the Santa Cruz Sentinel and I was stopped in my tracks when I read the article by Ryan Nakashima day lighting the new App available on iTunes named 'Viggle' which offers "reward points" for watching TV.

Please tell me that I am not the only knucklehead that finds it chilling that this kind of advertising and marketing has slipped under the radar or should I say slipped through the front door and into your living room through a "smart" phone.

Congratulations Americans we are now rewarded points for logging time in front of the boob-tube (if you own one). 7500 points will get you 5 bucks at..... are you ready for this - Burger King, Starbucks, CVS, and Best Buy.

The marketing executives are geniuses - if you watch enough TV you might actually believe that Burger King food is no longer poisonous and then you will have a need for more caffeine to keep watching to gain more points and the partnering with CVS pharmacies is absolutely a gold mind. It's simple math really, the more you watch the longer you stay on Lipitor - cha ching! Best Buy has the obvious role of selling you your next big screen baby. It all sounds like something I would have thought of as a joke in high school.

Chris Stephenson President of Viggle said, "We're basically allowing people to get rewards for doing something they're doing already and that they love to do". When you are dealing with numbers as large as the daily intake of TV with Americans, the rewards ratio has to be fair to the sponsors.

To earn enough for a latte at Starbucks, one must stare at the Television set every night for three hours for three weeks. It would not be fair to the networks if it was any other way otherwise folks would just clean up on the rewards.

What is odd (sad) to me is that these companies and partnerships are no longer even trying to hide the fact that they are keeping folks numb and plugged into the proverbial American Treadmill. Apps like these have become so widely accepted that if someone questions them they are considered "radical".

The idea behind Viggle according to the folks at Viggle is that if people have an added reason to watch TV, the size of the audience will increase, allowing makers of shows to earn more money from advertisers. The app will also give the company valuable insight into who is watching what.

I am surprised that the smart bastards that came up with this idea didn't name the App Oceania or Orwell just to rub our noses in it. I vote that we push for an App that rewards us for spending time reading, hanging out with friends, cycling, or doing absolutly nothing.....oh wait you can't track those things.

For the record:
I think that the new "bubble" that is growing at a phenomenal rate is the monthly nickle and dimming games that is being played on all of us worker bees (chumps) by the tech world. Mortgages are too risky and have a little too much oversight, but phones, apps, TVs - these are ripe for the picking as kids can now spend money without spending money.

What would Jobst do? 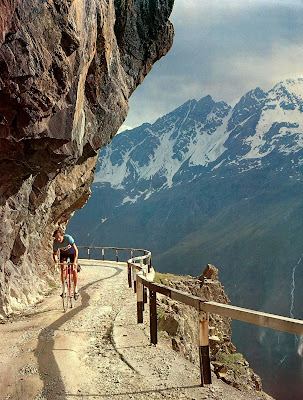 How many Viggle points did Jobst earn while pedaling up the Gavia Pass? How did he ever make it to the top with out a "smart" phone tracking his every move. The only way for them to make money off of Jobst would be to offer a cold one at Tom Sullivan's house, Rob Parson's compound, Peter Johnson's shop or at the Corralitos market.
Posted by Steel WÜl at 6:49 PM 1 comment:

Comical, But All Too True.

Almost makes one not want to be affiliated with the whole damn thing. Geekdom and naive obsession with tech and calories will always want to taint the pure experience of what we do. I think we have transcended this petty aspect. It's all about soul! Oh shit, that even sounds cliche! Funny, but true.
Posted by Steel Wüleur - aka Apple at 10:34 PM No comments:

Bay side meets coast side-

Dear Jake,
Just want to tell you how much fun I had riding with the SW gang on Saturday.
I was a little nervous about crashing your ride as some of the hot shit guys on the bay side can be a bit snotty-no respect for the ancients.I was amazed that so many of the guys know about Jobst and all the crazy rides we did.
It sure was fun seeing Whitehouse canyon again after about 20 years.It seems like the last time Jobst and I were up there we got some guff from the local rednecks.
I was very impressed with the SW gang's dirt skills,up hill and down.I hope I didn't bog you guys down too much.The Pipeline road had me on the ropes-A 24 pound bike with a 42 25 low gear powered by a old has-been has it's limitations.
I just viewed the video from the San Benito -King City ride -sure would of liked to been on that one.

I passed the Presidential Fitness Test!It was so fun to pass!I passed the mile run in 10 minets!My friend Carmen and I ran the mile together Carmen passed the mile too! the first time I was timed it took me 11:30.We have to run 6 laps around the field to do a mile. I am the first 2nd grader to pass! And I am the first girl to pass!the things you have to pass are. 1.CURL UPS 2. SHUTTLE RUN 3. SIT AND REACH 4. ONE-MILE RUN 5. PUSH UPS!
AND THAT WAS SO FUN....

Crash like a pro? Someone please tell me the joke is on me!

Bicycling Magazine randomly showed up in our mail last week so I felt compelled to flip through a couple of pages while relaxing in the Steel Wül lounge. It only took me 9 minutes to negotiate the 13 page ad for Pinnarello Bikes. The techno babble associated with those bikes have reached epic proportions. However, what really caught my eye was the hilarious article about teaching cyclists to "crash like a pro". I thought it was absolutely wonderful up until the point that I realized it-was-for-real! Evidently we are not only supposed to eat, ride, race, look, train, and act like a professional cyclist, but we are now to crash like one.


Here is what they are advocating:

1. Elbows bent and head up - look straight ahead
2. Look through the corner
3. Point knee into the turn
4. Press down on inside of bars
5. Keep weight over the tires
6. Counter steer
7. Aim the bike
8. Dump the bike in a controlled fashion
9. Bend elbows and land on left shoulder

Is it just me or does that read like someone cut and pasted an article of Golf Digest from 1982 outlining Tom Watson's "power" swing?


Here is my real world version of the 9 steps to crashing.

1. It appears as if you are going to freaking crash.
2. Crash.
3. You can hear your collar bone break, because your ear was touching it.
4. Your buddies have already called 911.
5. The gruppeto of riders have now caught you and they say, "oh that sucks".
6. You are put into a 700c sling and swath by your buddies .
7. Folks are giving you the financial report for your bike and it is ugly.
8. You can hear the Ambulance now.
9. You are regretting that you sold your only wind trainer at a garage sale.
Posted by Steel WÜl at 9:34 PM 1 comment:

Hitchcock country to the City of Kings 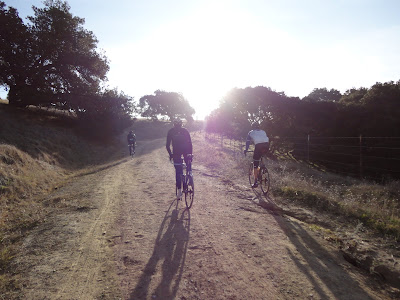 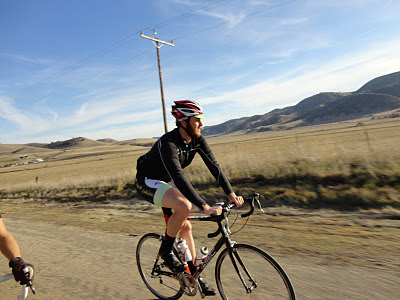 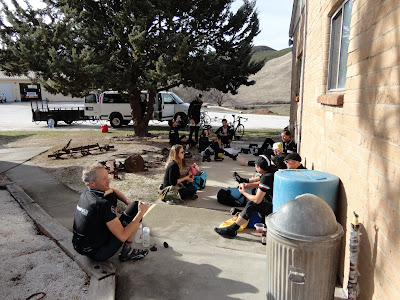