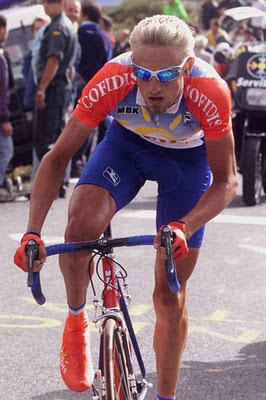 Check out this tribute to the late great VDB.

"It must have been when I was about 19 or 20 and went out training with a friend on the Belgian borders. As we spun along, out of nowhere this skinny blond kid was on our back wheel. He looked about 14. He was still there 15 minutes later, so we picked up speed. He just sat there, so we picked up the pace again. It was still no problem for him. I looked over my shoulder and he gave me a half-mocking, half-friendly grin. In the end, we went as hard as we could to try to get rid of him and teach the little brat a lesson, because by now he was getting a bit too cocky for our tastes. But whatever we did, he still hung on. After about an hour, we came into a village called Ploegsteert, at which point he came alongside with real arrogance and said 'OK, I'm back home now, so 'bye. By the way, I'm Frank Vandenbroucke.' Neither of us had ever met a kid like him."[5]