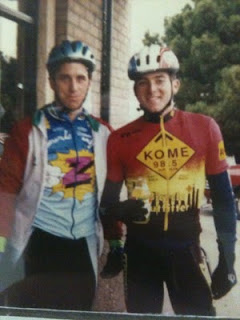 This was January of 1993 and yes, that is a glass Gatorade bottle in my hand. Gentes called me the night before and asked me what I was doing tomorrow besides riding with the Rocket. We met him at the Los Gatos Lodge and Otto followed us in his signature Mercedes wagon. I spent my food money on the disposable camera (photo by Greg Shapleigh). Lemond was eating now-and-laters, licorice, and sour patch kids. He told me that powerbars were over rated. He was like a diesel engine and did not warm up until hour 5 when he dropped us like a bad habit. He was on a custom Calfee with a frame pump duct taped to the head tube.


SteelWül represents cycling in it's purest